As many of you know, I judged the French Bulldog National Specialty Sweeps in October of 2008. Here are my thoughts on that auspicious event! This write up also appeared in the National Specialty issue of JustFrenchies…you all are getting a sneak preview!

Judging your breed’s National Specialty is quite an honor and one that I was thrilled to be voted, by my peers, to undertake. For months before the French Bulldog National Specialty I obsessed over all the usual things…what will I wear, what if people do not like the winners I pick, what if I fall down or even worse, my pants fall down or what if everyone says I am old and fat. I babbled on and on about all of this until my husband, Steve, said…”Don’t you think all of them are older and some of them fatter since the last time you saw them?” I had to laugh and all of my worries and stress disappeared. I knew that none of you cared about ME, all you wanted and expected was for me to walk into that ring and pick the puppies that I felt best matched the standard on THAT day. And that was exactly what I planned to do!

We have a resort in far northern Minnesota (yes, brrr), and that going virtually anywhere involved planes, trains, automobiles and sometimes sled dogs (just kidding on that part!).To get to Kansas I drove three hours to Fargo, then hopped a flight to Denver and then on to Kansas City. I got in really late and there were no more shuttles, so I had to take a cab. After a bit of a ride, we pulled into the hotel parking lot and the very first French Bulldog I saw was Jackpot! Daily Double, now adored by Kathi and Jim Luljak and also renamed Chloe.  Chloe is now 13 and it was a delight to have the very first Frenchie I saw be one that I had bred and was a very senior citizen (don’t tell her I called her that).

I rested up and was ready for my assignment the next day. To my delight, obedience had so many entries they ran quite a bit over – time-wise. Isn’t that fabulous? So many French Bulldogs that are actually DOING something! My congratulations to all of the Obedience participants.

This gave me a bit more time to sit and ponder the importance of what judging the Sweepstakes at the French Bulldog National Specialty meant to me. You see, I have had a long and loving relationship with my French Bulldogs and have had quite a few generations of Jackpot! French Bulldogs. But with our move to the Big Woods, I just was not able to get the same level of vet care that we were used to in the Twin Cities area. That and I had achieved my goals and the whole competitive part was just not as satisfying as it once was. I made the oath to myself that I was going to select French Bulldogs that made my heart sing, no matter who bred them or showed them, if I even knew, it had been a while since I have been to a dog show! Yes, I knew that no matter what I had to stay true to myself and just judge the dogs.

I am digressing and I bet you are all ready for me to get on to the FRENCHIES!

When I got back to the ring I was told that I had to move fast and make sure I was through before the time for the club meeting. I took a deeeep breath and said, “It will take as long as it takes, but don’t worry, all will be fine.” I do not wear a watch, but knew that it WOULD be timed perfectly. I am a huge fan and believer in Eckhart Tolle’s work and I knew that by staying completely in the moment and not allowing my “mind” to make my decisions, but to go with what the True Me knew to be so, that I would be just fine with my placements…and so it began.

The first class was a lovely class of 6-9 puppy dogs. There were two boys that caught my eye at the beginning, a golden fawn and a white cream. Both of them were gorgeous and moved perfectly…trained to the max! But the fawn puppy made my heart sing, he has a lovely upsweep of underjaw and was just the perfectly cute package I love to see. It was REALLY close, but I went with the fawn puppy for first in that class.

The 9-12 Puppy Dogs were next and it had two lovely brindle boys that vied for my attention )I know that sounded like a romance novel, but they DID). Both had lovely heads, nice jaws and really pretty, expressive eyes. The boy I gave first in the class to was a bit more compact, so he won the class by a nudge. My second place boy had the sweetest expression and made my heart melt, I must admit.

Next were the 12-18 Boys and in they came! These boys were, of course, more mature than the previous two classes and I loved seeing their potential almost fulfilled. In this class it came down to movement, as heads were all strong and they were all of nice shape.

Boys were through and now onto the Girls!

I have always felt there is nothing more adorable than a fat, sassy Frenchie bitch puppy and this class did not let me down. Each puppy that sauntered into the ring was an amazing representative of the breed and it made me feel sooo good to see that our breed just keeps getting better and better. This was the biggest class and I knew that I had my wonderful work (more like play) cut out for me. Once again, it was easy to find four typey, correct, beautiful Frenchie girls to fill the slots. I just could not take my eyes off this one pied girl, she just sparkled and has quite the show presence. So, she walked out with the first placement.

The 9-12 Class was not as big as the 6-9 class, but the puppy bitches were of equal quality. Once again, I was so pleased to see such sound, classic French Bulldogs. I placed them easily and, as always, just wished I had more ribbons!

The 12-18 Class was my toughest class to judge. The one who eventually got the first placement had a stunning pied bitch right on her heels. I went back and forth in my mind and could have virtually just as easily given that glorious pied bitch the first. In the end, I had to just had to go with showiness and the brindle edged the pied out by the most narrow of margins. That class is the one I have replayed in my mind, as those two girls were very different in type, but of such absolutely stellar quality! Agony!

Now that the placements had been made It was time for the Grand Finale! My class winners trotted back in and I had the opportunity to see them all again. I was very, very pleased with the final roundup and I am not “blowing smoke” by saying that each and every one of them could have easily walked out with the Best in Sweeps ribbon and I would have been satisfied with myself on my judging assignment. In the end, I had to take it down to this…what if I were starting a breeding program from this selection of French Bulldog puppies. Which dog and bitch would I want to go with, from appearances alone, that was how I determined my winners.

I will share this next bit with you, laugh, smile or shake your head, I want you all to know what I felt. Throughout the judging I had done as I had promised myself…I did not allow who the handlers were to affect my choices, I just watched the puppies, with delight, I might add, and placed them. I knew I could look anyone in the eye and tell them that I TRULY  judged the dogs.

But, I could not help but know what I do know and I was very well aware that my two I had determined to be my Best in Sweepstakes and my Best of Opposite Sex were from the same breeders. Only at that moment did I waver and a teeny bit of doubt entered my mind. My delicious dilemma was this…Do I award the ribbons to the two I wanted to, that I yearned to, the top ribbons…or did I play it safe and pick a different Best of Opposite. I knew I HAD to stay true to myself and judge the DOGS, so I pushed my insecurities out of my mind and allowed my soul to be true to itself and I awarded the ribbons as I knew I must.

So there you have it! Probably the oddest accounting of judging a National Specialty Sweepstakes, but those of you who know me expected no less. And I do believe Eckhart would have been very proud of me.

PS – And by the way…I did finish ten minutes EARLY! 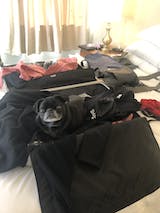