Does Your Olde English Bulldogge Have a Rough, Dry Nose?

Bulldogs have the most passionate fans and fanciers. Maybe it's the association with sports teams, maybe it's the utter confidence Bulldogs all seem to exude, maybe it's their rough and tumble, everyman demeanor. Regardless, Bully breeds have legions of Bully lovers!

Virtually all of the various Bulldog breeds struggle with dry, crusty, or even cracked nose issues. Not only do Olde English Bulldoggee's have overall dry noses, but they can also have the more extreme version where the nose looks like it has oyster shells on it called Nasal Hyperkeratosis. The good news is Nose Butter® works for all types of Olde English Bulldogge nose issues FAST!

Encoded into your dog's genetic makeup is a fearless desire to guard and protect those he loves. Your Olde English Bulldogge may never SEE a bull, but he still has DNA telling him to stand guard over his charges again the enraged bull. 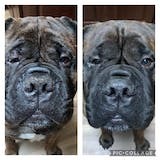 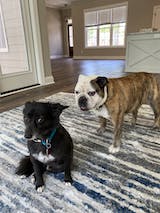