An Ancient Breed With A History Steeped in Mystery

The Chinese Shar-Pei, an ancient and unique breed, is thought to have originated in the area around the small village of Tai Li in Kwangtung Province and has existed for centuries in the southern provinces of China, apparently since the Han Dynasty (c. 200 B.C.). Statues bearing a strong resemblance to the Shar-Pei have been discovered and dated to this period. More recently, a Chinese manuscript of the 13th century has been translated; it refers to a wrinkled dog with characteristics much like those of the Shar-Pei. –From the CSPCA (Chinese Shar-Pei Club of America)

Of course, this means the genetic pool wasn't a pool or a pond…it was a puddle. This small DNA variety led to a variety of issues that the dedicated Chinese Shar-Pei community has worked to eliminate.

A chronic dry nose may be a symptom of a slightly depressed immune system. If the nose has an extreme level of dryness or layers of crust your Chinese Shar-Pei may have Nasal Hyperkeratosis. More on that condition in Tabs below. The good news is any level of dry nose issue can be easily treated and a healthy balance maintained with routine Nose Butter® usage as a crusty dog nose remedy.

Krinkle Dog and Me 80s Style

A thousand years ago, in the late 1980s, I shared my life with a few Shar-Pei. Yep, that's me with Krinkle Dog. I was working those 80s leg warmers in the Dallas summer. Krinkle Dog was a sweet loving dog and I still miss him.
Nose Butter® All Natural Ingredients I ordered some nose butter for my Boston terrier his nose was really dry. After use for 2 weeks his nose is almost totally healed. Great stuff. Thank you also to the blissful team for quick shipping thank you

You are VERY welcome. Nothing makes us smile more than hearing our customers are pleased with our products! We are waaay out in the woods, so we appreciate fast shipping ourselves and it means a lot y'all noticed! Thank you again! -Kathy

My Pomeranian has a very dry nose if I'm not using Blissful Dog nose butter! Seriously, I've tried many others and this nose butter is just magical. My dog's nose is soft, wet and no more dry cracks. I share with all my friends how amazing this nose butter is. Thank you for making such a wonderful product. 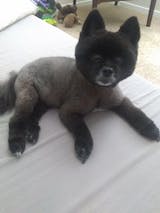 I am so very pleased with the Nose Butter and the speed that it was delivered!! My German Shepherds nose is healing right before my eyes. Thank you for such a wonderful product!!!

It worked exactly as advertised. My Husky’s nose got all crusty on too had no idea what it was. Did a Google search and came across the before and after photos on this website and said, that’s exactly what issue my dog has! I gave it a shot and it worked perfectly. He just gave us a hard time applying it but we did. Thank you so much!!!

I love your nose butter for my sweet Japanese Chins, Mia & Bailey! It goes on easily and really moisturizes their noses. Also, we appreciate your support of Luv a Chin Rescue in the past!!

My Charley has had a crusty nose forever and we didn’t know what it was. I did some research and discovered your Nose Butter. Game changer!! Works great and Charley looks so much better!! Great product from a great company, thanks! 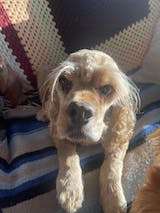 Charley has the sweetest face! Now, with a new shiny nose, I know he feels better. Thank for for taking the time to share the picture, he looks so happy! –Kathy

I’ve tried everything to fix my English Bulldog’s dry, cracked nose and this is the first thing that actually works!